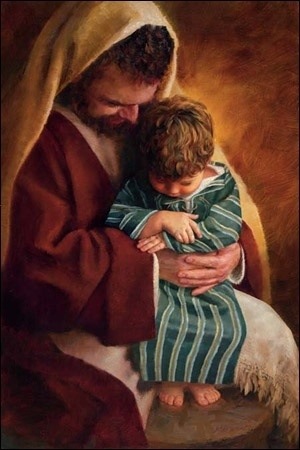 Today is the feast of St. Joseph, and I must thank him for being the epitome of everything an earthly husband and father should be. I am also grateful for his intercession because were it not for his prayers, Gary may not have been formed the way that he was after his conversion.

A friend of mine shared this beautiful video of “Joseph’s Lullaby” to Jesus. It really enters into his mind and heart as the foster father of our Savior.
What an amazing privilege it was for him to be chosen, as Our Blessed Mother was, to help raise the Son of God and teach Him everything he knew.

It was not an easy time period to live in for the Jews. They were not completely free, and the cultural and political pressures imposed by the Roman Empire surely took their toll on Joseph and Mary. But they trusted in the Father’s plan and believed in the greater mission of ushering in the kingdom of God for the salvation of all humanity. Heaven was always their focus and not once did they lose sight of it. From the moment they were each aware of His presence within Mary’s womb through the years that they would watch Him grow into adulthood, the King of kings would serve as a daily reminder to His parents that they were meant for greater things than this world had to offer..

Gary and I were talking about how desperate our society has become – hungry for power, material wealth, and self-indulgence. The thought of eternal Paradise was the only thing that kept us from hypothesizing all the despairing possibilities for our children’s future. We have to prepare them, we said. At least they will have each other, as well as the other young ones whose parents are instilling and preserving the values that yield a resilience no one person or government can destroy.

Following the example of Joseph, I watch my husband take the lead as head of our family to guide and protect as best as he can. We are not perfect by any means, but it is a great consolation to know that we can beg for the grace to walk in the footsteps of history’s most courageous husband and wife team. May we fall into the merciful arms of Jesus as we actively engage our children in the Culture of Life. There is much work to be done…saints to be made…truth to be taught. So with the long and narrow road ahead of us, here we go!

St. Joseph and Mama Mary, pray for us!