College. Spring 1997. I thought I had it all. The friends…the cool boyfriend…rockin’ siblings…a restored relationship with my mom…a nice car…and I even held down 2 jobs while going to school so I could buy whatever I wanted. Being President of the sorority I helped found and also heavily involved in the Pilipino club, I couldn’t have dreamed up better times. Younger girls would follow me around campus and say, “Can I just be you for one day?” Sounds ridiculous, I know. But it’s true.

For the sake of this part of the story, I have to admit that from the outside looking in it seemed like I had it together – at least through the world’s eyes. Not only was I fairly accomplished and respected, I was even proud to say that I could hang at the bar with the best of them. My weekends were full of places to go and people to see. There was nothing more I could really ask for.

…until a sinking feeling cut deep into my heart and I found it completely…empty.

My boyfriend and I were walking to the parking structure one day after school. He took one look at me and asked, “What’s wrong?”

I started crying. “I don’t know. Everything’s fine. I just…hurt inside.”

Nothing bad happened. No one was responsible for my unhappiness except me. It’s not that I didn’t feel loved by the people in my life. It’s just that “all that I had” now wasn’t enough.

That night I sat down at the dinner table with my head in my hands, quiet and reserved. I wasn’t one to open up much anyway, but my mom knew. The new-found depression was written all over my face.

“I think you should come to church with me and Emeline,” she suggested.

I rolled my eyes. “We already go to church on Sundays.”

“No. You need to come to this program on Thursdays. It’s good!”

There was something different in her voice. Something I’d never heard before…as if light was shining through her words…if you could “hear” light…

“What do you do there?” I asked glumly.

“Watch videos! The speaker is excellent!”

Oh great. I was already bored at Mass. What could videos possibly do to pull me out of this funk? The fact of the matter, though, was that I really didn’t like feeling this way, and my mom seemed to be convinced that she had something I needed.

“Fine,” I answered reluctantly. “I’ll go.” Honestly, I didn’t have anything better to do. I mean, there was the Arena on Thursday nights, but the clubbing scene was getting old fast.

My youngest sister was SO excited that I’d be joining them. Emeline worked at the Christian bookstore in the mall. She would come home singing strange songs from some cartoon about vegetables and fly through novels that were thicker than my biology textbooks. This girl was like walking sunshine, and I just didn’t understand how she could be so cheery all the time. It was sheer perpetual perkiness. See, my baby sister was born to be everything I thought I could never be: obedient, studious, hard-working, loyal, and incredibly optimistic. From where I was standing, she always did everything right. So it only made sense that she became the Jesus-loving, Bible-verse-reading evangelist who wanted to set the world on fire with the love of God. Deep down I envied her, although I was so set in my ways that I never thought to follow in her footsteps. After all, I was the big sister. I knew who I was and what I was doing. Sort of.

This time, however, I was desperate.

Each passing day turned into an eternity. I finally accepted the fact that I needed help when I looked around my bedroom and noticed a slew of wine cooler bottles scattered throughout my desk and bookshelves. Who knows how long they’d been there? For months I didn’t think it was a problem. And it wasn’t like I was taking shots by myself, right?

In that moment, my eyes were able to see into my heart and find the reason for this growing dependence on alcohol. I was trying to drink myself into becoming someone I knew I was not. And my sister…well, apparently she didn’t need to turn to a substance to get comfortable with her identity. She had a Person.

I was curious about this relationship Emeline and my mom had developed with Jesus. I did know about Him. He hung on the crosses at church. My dad used to act out these fun Bible stories where Jesus would raise people from the dead. There was even a picture of Him in our hallway whose painted eyes would slowly follow me as I walked from the stairs to my room – especially when I did something I wasn’t supposed to do. His face was very familiar.

The thing is that Mommy and Emeline now talked to Him and about Him as if He was their FRIEND. Weird. I didn’t get it. But after going to one of those Thursday sessions in this ALPHA program, I wanted to be His friend, too. I wanted what they had. JOY…PEACE…simple appreciation for LIFE. Every Thursday I would go, and for some reason I didn’t miss the lifestyle I was leaving behind. For the first time ever, I both experienced and understood unconditional Love…the kind of acceptance I’d always longed for…even stronger than the greatest love my parents had for me.

If it wasn’t for my mom’s invitation, I truly believe I would still be wandering the world aimlessly searching for meaning in my life. Because she cared so much for my soul, she brought me to a place where I would begin to heal from my past mistakes and be forgiven for the worst sins I’d ever committed. And Emeline was my most enthusiastic cheerleader. This was typical of her – ever since she was little, she always had my back. At every performance I had, she’d yell the loudest and didn’t care who was around. If I did something, she wanted to do it, too. If I had a friend, she’d want to be their friend, too. I’d never felt more supported by anyone else before…and I took it for granted until I realized that this was when I needed her more than ever.

Now she was cheering me on towards Heaven.

God puts certain people in our families because He knows how badly we will need them. I wouldn’t have stuck through the end of the ALPHA program if Emeline wasn’t there with me. I wouldn’t have joined the Charismatic prayer group on Tuesday nights if it wasn’t for her either.

I remember driving with my sister to church one day and she was telling me about this OTHER program she attended on Tuesday nights. It was called a Life in the Spirit Seminar with talks (in person) about our faith. It sounded similar to ALPHA, but she said that – just the week before – this particular woman who spoke about the suffering and death of Jesus made it so very personal for her.

“When she was talking, I could see Jesus in front of me…bleeding and dying…just for me,” Emeline shared openly. “I was totally crying the whole time! Oh my gosh, B.anne…YOU HAVE TO GO!”

That was my sister’s signature phrase. She said it to everyone with such a contagious spirit that we all were so curious about whatever it was that we “had to go to”. Emeline never second-guessed her invitations; she joyfully and unapologetically told people about Jesus and exactly where they could go to meet Him. Her zeal for the Gospel was overflowing and we somehow knew that this Living Water she was offering could perhaps quench the thirst our souls had inside for truth…for faith…for love.

This was the best gift Emeline has ever given me. Hands down.

Thanks to the combined efforts of my mom and my sister, I was at church at least 3 days out of the week and I couldn’t have been happier. It was a difficult time since I was withdrawing from the social scene I once was a part of. Friends stopped calling me to go out. My convictions got stronger and I had to pick up where my 3rd grade Catholic school girl self left off many years before. There was a lot of letting go and catching up to do all at the same time. But with Emeline by my side, it was going to be okay.

Before long, our other sister Roselynn was going to ALPHA and prayer meeting. Our cousins joined us and many others who were looking for a community of brothers and sisters in the Church. We volunteered as group leaders and speakers for both the adult ALPHA program and Youth ALPHA. I was relieved that I finally found my identity in Jesus Christ and no longer had to try living two totally separate lives. Having two feet in separate boats didn’t work for me. The path I had chosen was a difficult one, but there was comfort in knowing that I wasn’t alone. 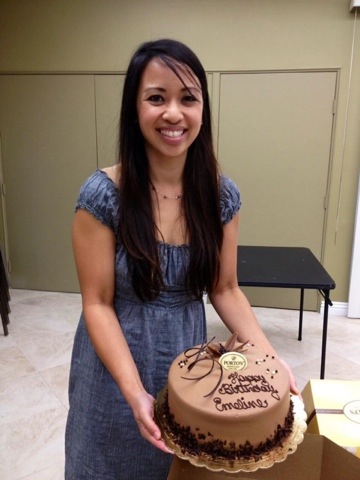